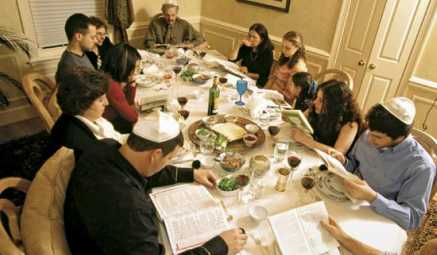 What are the Practises of Judaism?
There are several forms of practises incorporated in the Jewish religion mainly done as a more practical form respect.
Kosher: is a common dietary rule associated with Judaism based on the specified instructions of the Torah and has held great meaning throughout Jewish history. There are also dietary limitations and the foods are cooked and prepared according to the Jewish Dietary laws. "Do not eat blood, do not cook a kid in its mother milk, do not eat shellfish, do not eat birds of prey and only eat meat from animals with split hooves who chew cud."
Many observant Jews feel the need to incorporate the Kosher law as a doing of greater respect to God whilst other members of the Jewish religious community prefer to semi-kosher (going under the Kosher rule at home and dining normally outside) and some even prefer to exclude Kosher entirely.

Birth and naming ceremonies: Once a Jewish child is born, the father is required to pray and ask for health and well being blessings. Most female children are named the first coming Sabbath however a male child is named on the eighth day and on the same day Brit Millah (male circumcision) takes place.

Coming of age: By the age of 13 , a boy is considered an "adult" and is expected to obey all commandments. Like wise, the female becomes a "daughter of commandment" by the age of 12.

Marriage:Marriage is a greatly valued in Judaism and this leads to a concept of family importance and family being the central importance of life. Marriage also elevates ones religious position as only a married man is able to become a rabbi.

Death: Death is seen as a natural theology and a plan of God. However the teachings of Judaism incorporate the immortality of the ones soul. (This links back to the 13 fundamental principles "the resurrection of the dead"). Mourning services do take place to comfort and help them return to their place and after the family of the deceased return home, food and visits are brought to them for the next seven days.


What are the festivals and ceremonies of Judaism?
The Sabbath: This day is known as the "rest day" (quote from the bible, "in six days the Lord made heaven and earth and on the seventh day he rested"-Exodus 31:17).
Jewish people are free of study, prayer and focus on enjoyment and leisure.

Rosh HaShanah: This day is known as 'the birthday of the world' and the anniversary of creation. It starts with remembering and acknowledging the wrong-doings before the Day of Atonement. On this day, apples and honey are eaten to symbolise and hope for the sweetness of the upcoming year.
Yom Kippur: This is a day that allows people to spiritually cleanse which enables one to start a fresh, new year.
The passover: This day is used to commemorate the exodus of Egypt and agriculturally the beginning of a new harvest season in Israel. Children are given unleavened bread and are told about the chain of events of then Exodus.
Days of mourning (Tish b'Av): The day in which is used to commemorate the destruction of the Jewish temples through fasting, reading and singing to describe sections of the persecution.