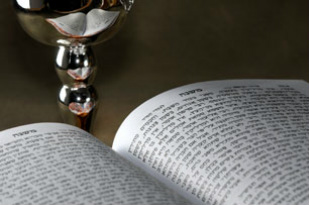 "Learning God's teachings is equal to everything else"- The Talmud

Jewish people are called 'the people of the book' referring to the sacred texts of the Jewish religion.
The bible is divided in to three main parts:
-5 books (Genesis, Exodus, Leviticus, Numbers and Deuteronomy), which contain the 613 commandments and described the early of history of the people in Israel.
-The second section, the handling of land and writings of prophets, the people and their relationship with god and guidance on the way of life.
-The third section, Writings which contain the psalms, historical books and insight literature.
In the Jewish religion, studying the sacred writings is a fundamental element contributing towards the practise, belief and worship of Judaism and is considered as important as a prayer. It is considered a way to become closer to God.

The Mishnah is a written gathering of the Oral Law and represents the main laws and principles of the Torah in an oral context. It is divided in to six topic areas: Prayer and agriculture, Festivals, Women, Civil Law, Rituals and Purity. The Mishnah represents the laws and origins in an oral context It has been passed down through many generations, even after many years reckless history, dates back to the destruction of the temple in (AD 70)  and finishes with a message that conveys the future coming of The Messiah.

The Talmud is composed of the Mishnah and the Gemara and morally improved stories, Bible interpretations,  and about apprises us of the lives, views and perspectives of religious figures and people such as rabbis.

Study is the most important in Judaism to connect and understand God, inspire goodness and as an academic leisure. Jewish literature also historical, ethical tracts and philosophy.
Scholars were considered superior due to their high intellectual qualifications in religious areas and academically. Synagogues give the opportunity for adults to travel to Israel to study during their gap year, and universities offer different courses of Jewish Studies and today there are an increased number of people studying the religious texts.